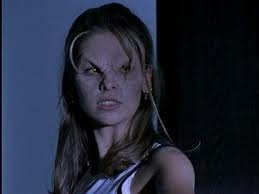 episode 10 of Buffy the Vampire Slayer: a girl's inane shownotes.

One of the Slayer's supernatural gifts is premonition-type dreams. The first nightmare of the episode is about the Master (the show's first Big Bad) defeating her, which means they're gearing up for the season's end. It's about time! Outfits one and two are light and fluffy even though she's plagued with nightmares. I miss those big ass rings of the '90s. I need some more of those big plastic colorful globe rings.

In this episode we get to see everyone's secret nightmares. What are my nightmares? Being lost in the church I went to as a child. Being late to class or work and not being able to find where I'm going. I used to have nightmares about not being able to stop my car, then I got a car with better brakes. I used to have nightmares about running from a big scary man and my feet would get stuck and I couldn't move, then I took control of my life and stopped associating with asshole-type-men.

It seems odd that Buffy has a fear of becoming a vampire. Ok, the nightmares are real. Giles can't read. That's the nightmare that is horrifying to me! First appearance of Buffy's dad. First of like two. First time seeing Buffy cry. I love how Buffy cries. Her eyes get all wide and horrified. Mean dad nightmare!

Cordelia's nightmare is crimped hair, apparently...and being on the chess team.

The nightmare demon manifestation has a big club hand and is very scarred and gnarly. Since when does Xander gorge on sweets? Willow has to sing Madame Butterfly in front of people which is inexplicable that she is always having these public performance nightmares in all the dream sequence episodes because they never really discuss the reason for this. Xander just punched out the clown from his nightmare; just confronted it head-on.

This is the first episode where there's a whole Sunnydale-wide epidemic. Everyone is living out their nightmares. So It's not Buffy's nightmare wherein she's a vampire: its Giles'. Or, really, both of theirs at this point in the dream wherein everything is a nightmare. Good episode!
Posted by Mixtress Rae at 10:05 PM