Buffy the Vampire Slayer: Welcome to the Hellmouth 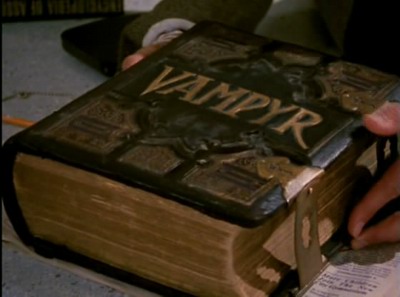 I've decided, in order to occupy myself on sick days and other free time chunks of my life when I could be prone to too much self-analysis, to rewatch Buffy and write about it! Yeay: two of my favorite things: Buffy and academics!!

Buffy the Vampire Slayer: Journal of an Obsession.

Entry #1- Welcome to the Hellmouth shownotes: I love how the show starts out with a seemingly innocent schoolgirl being lead through the highschool at night by a teenaged boy and you suspect the boy’s a vampire because the girl is acting all goody-goody, but she’s really, SHOCKER, naughty naughty. She’s the vampire. This is, of course, Joss Whedon’s (creator/head writer of Buffy) intentional gender role reversal from the very first scene of the very first episode of this seven season epicly-spectacular series. Scene two shows the protagonist as a cutesy short blonde girl who, if you didn’t know the premise of the show, doesn’t seem like she could slay anything. From the beginning, you are to suspend all your typical beliefs about how things appear, and this theme is paramount throughout the show.

It’s pretty hilarious that Xander’s introduction to the show is on a skateboard, as he’s never seen with one again.

What school checks their textbooks out in the library? If this is how they do it in Sunnydale, how come there’s never anyone in the damn library?

I like how Buffy immediately gives a disapproval face to Cordelia when she insults Willow’s nerdy dress, instantly aligning herself with the misfits.

Valley speak? Perhaps this was an homage to the movie? Regardless, I’m glad they abandoned that after episode 1.

Xander is hilarious from day one. *sigh* Xander is dreamy. He has that vague highschool boy sleaziness that only an adolescent in the mid-‘90s can bestow: Michael used to have this same style-effect back in the day.

Buffy is such a Watcher-backtalker! Yeow! Loves it!

The first Big Bad is introduced already: a classic Nosferatu-type vampire called The Master. He is summoned with incantations from a pool of blood, of course.

Oh, there’s Angel. He looks so pale and young! I used to hate his guts, but now I kind of like him. So broody! Velvet jacket, though? They so did not have his wardrobe worked out, yet! Ooh, mysterious Angel, didn’t even tell Buffy his name, yet he gave her a cross necklace. What a dweeb.

I heart the Bronze! It’s the coolest ‘90s adolescent hangout ever. I wish this place existed in Joplin when I was a sophomore in high school! Oh, cute, Willow’s eating a box of raisins.

I wonder if they had a different wardrobe designer at the beginning, because everyone looks terrible. Willow’s bad nerd-dress, Buffy looks like a mom or a typical Christian character...was this how we dressed in 1996?

One thing I really love about Buffy is that I grew up with her. When the show started, she was a sophomore in high school and I would have been a freshman, I think...maybe I was in 8th grade, either way we were almost the same age throughout the series. Buffy, with its diversity and subtexty-parallels-to-real-life-themes, was a good influence on me in my adolescence like GaGa and Glee are to kids now.

I actually didn’t start watching Buffy until season three when Faith arrived. A boyfriend forced me to watch it and I was incredibly resistant, because I liked the movie and thought the show would be stupid, not unlike thousands of people over the years have assumed, and then later watched one episode and been totally hooked. I loved the show right away and watched it through the season. We lost the WB network on local TV after that year, so I missed seasons 4 and 5, rejoining season 6 when it aired late at night on UPN. It was a shocker at the beginning of the 6th season, *spoiler alert!* because I had no idea Willow was gay now or that Buffy was dead.

Ah, getting ahead of myself! So, the first episode gets a lot of the main details out of the way, like a good first ep should. I’m glad they didn’t name it “Pilot”. I hate that.

Commentary (by Joss Whedon) notes added 5.22.13: Joss says the mission statement of the whole show is that "nothing is at it seems". Unfortunately, usually that means the girls kick ass when you don't think they will. When Joss cast Willow he wanted to make sure he didn't cast the "supermodel in the horn-rimmed glasses" type and get an actual quirky girl. Glad he pushed for someone like Alyson Hanigan.

The decision to make the vampires be in and out of vamp face was because Joss wanted the "villains" to not always be obvious, but he wanted them to be seen as villains when B kills them. He made them "dust" because he didn't want the good guys to have to clean up the bodies and for it to be plausible for the vampires to remain unseen by the general population.
Posted by Mixtress Rae at 8:00 PM