Buffy the Vampire Slayer: Never Kill a Boy on the First Date 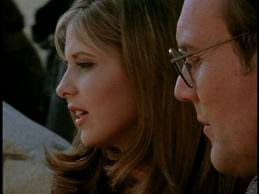 (So, I just finished season 8 [the series continues after season 7 in comics] and some SERIOUS shit goes down! I will not spoil it, but DAMN!)

This might be the first (of MANYMANYMANY) episode to begin with Buffy slaying in a cemetery. Oy, with the prophecies, already! So many prophecies in the Buffyverse. "As it is written, so shall it be" bla bla bla.

Buffy actually has a nice outfit in this ep. A short polyester shifty dress. Maybe this is the fashion turning point.

I should count the times that Giles actually checks out a book to someone outside of the "Scooby Gang": one.

Ok, so there's this ominous main plot of prophecy and the "Anointed One" and bla bla...but I'd rather talk about fluffier things. I'm not really doing this shownote thing to describe plots...plus I suck at that anyway...

Vampires sure looked gruesome in the beginning! They looked like zombies, kinda. I wonder if the Buffyverse vampires poop. They get to have sex, so it would make sense. I know Anne Rice vamps don't poop, but they're all delicate and pristine. I think Spike gets gassy sometimes, yeah?

Buffy's first attempt at dating a normal boy. I typically am not into the whole bad-boy thing, but in Buffy's case, she does NOT need to be with a white-bread-type boy. Ugh, like Riley?! Don't even get me started on Riley. She's much better in dramatic turmoil with vampire boys. This date of hers is boring me.

Apparently they hadn't worked out Giles' backstory yet, 'cause he's being a dweeb (holding up a cross with a scared look on his face and running, etc) in vampire combat, and you know he's got better moves than that! I mean, his nickname in his '20s was Ripper, for fuck's sake!

"Buffy, when I said you could slay vampires and have a social life, I didn't mean at the same time," says Giles. Moral of the ep. How come Willow and Xander pretty immediately were let into the mystical slayer world, when other newcomers are met with extreme distrust for months before they're let in? I mean, I know they're Willow and Xander, but this was before we knew they were Willow and Xander, ya know?

Doh! There's Giles getting knocked out! I should count those too: one.

Xander-disdain with a juicebox: cute!!
Posted by Mixtress Rae at 12:13 AM