Buffy the Vampire Slayer: Out of Mind, Out of Sight 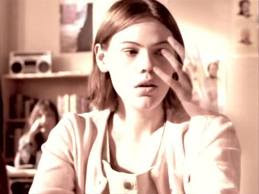 *I've decided that the "one-Buffy-episode-a-day" thing is more of a suggested average than a strict rule. Right now I am 6 episodes behind. Hopefully I can finish disc 3 tonight and this week is a light work week for me, so I should have plenty of time to catch up...

Episode #11 of Buffy the Vampire Slayer: the shownotes of a Fuchsia-haired weird girl:

This is the episode where a terminally-shy-and-unnoticed girl becomes literally invisible. The "anger of the outcast". This is something, as an outcast myself, I never really experienced. I guess maybe I don't count as a real outcast because I CHOSE the lifestyle. I was called a slut and a freak, but it was because of how I dressed. I knew how to act socially to be popular, I just didn't care to play the game, so I didn't. I can't really imagine what it would have felt like to care about popularity. I was always fine on my own and with the approval of my few friends. As my friend Nicole reminded me last week, I was always nice to everyone, so I think I was well-liked, though again, I didn't pay that much attention.

They're still establishing the rules of the show at this point...reinforcing the metaphoric text (girl feels invisible, then becomes invisible). They still haven't started making Cordelia sympathetic...she's just the stereotypical popular bitch still. But it is clear that she is the symbol, at least to Buffy, of the normal girl life she's left behind and can no longer inhabit.

"Reality is shaped, even created by our perception." Once again, Giles nails it.

Ok, maybe they do know where they're taking Cordelia's character. She just showed up in the library and is asking for Buffy's help. This is the beginning of Cordelia being a part of the Gang. Eep!

C: So, are you saying she's invisible because she's so unpopular?
B: That about sums it up!
C: Bummer for her. It's awful to feel that lonely.
B: ...so you've read something about the feeling?
C: Hey! You think I'm never lonely because I'm so cute and popular? I can be surrounded by people and be completely alone. It's not like any of them really know me. I don't even know if they like me half the time. People just want to be in the popular zone. Sometimes when I talk, everyone is so busy agreeing with me, they don't hear a word I say...
B: Well, if you feel so alone, then why do you work so hard at being popular?
C: Well, it beats being alone all by yourself.

Just when I realize they're not showing any depth to Cordelia, they pull out her tactless truthfulness, perhaps the best part of her character's personality. This is the first time they've really shown any of her traits beyond ruthless popularity.

Creepy that the invisible girl numbs Cordelia's face in order to carve into it while she's on her May Queen throne. It's the opposite of Carrie. This is a little bit TOO creepy. The kid gets a little too crazy too fast just for being unnoticed in high school. I suppose that's how school shootings happen, though.

Oh, yeah, the FBI comes in and uses Invisible Girl for secret agent stuff.
Posted by Mixtress Rae at 10:07 PM

Labels: buffy, out of mind out of sight