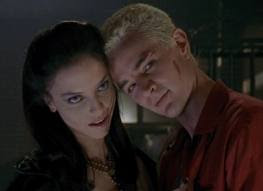 Buffy and the other most meddlesome kid in school, a girl named Sheila, have to organize Parent/Teacher Night. Ope, Buffy has camel toe! Why do I keep noticing camel toe?

Hell, yeah! Metal music, Spike running over the Sunnydale sign and smoking a cigarette in his long black leather trenchcoat. I'm headbanging and holding up hardcore hand signals right now...and rewinding, so I can watch that entrance again. Also, combat boots, black nailpolish, a Zippo, and he exhales the smoke through his nostrils. Baaaaaaad boy, Spikey! Yeow!

So far, they haven't showed any vampire except Angel NOT in vamp face...I'm thinking Spike may be the second...oh, nope. The entrance of Drusilla, she was without vamp face and immediately when Spike sees her his goes away revealing his most human trait immediately, as love, of course.

Spike's first interaction with Buffy is a slow clap and a "Niiiice work, love" and then a threat to kill her on Saturday. Cordelia is helping whittle stakes. She's almost fully integrated into the gang these days.

Giles had to do research to find that Spike has fought and killed two Slayers in the last century? Why would he not have already known that? He's a professional Watcher, right? Perhaps Giles doesn't read as much as he says he does, eh?

This is Joyce's first time seeing Buffy in fighting action, I think.

Continuity Issue: Spike calls Angel his "sire" when we all know Spike's sire was Drusilla. But to be fair, they didn't know at this point they would be keeping Spike on for six whole seasons.

Yeah, Joyce hits Spike in the head with a fire ax!! Go Joyce-y!!

The first indication that Principal Snyder and the Chief of Police, later the Mayor, know about vampires is at the end of this ep. Snyder is talking to the Chief of Police and they decide to tell the press the "usual" story; "gang-related, PCP" instead of the truth.

Joyce gives Buffy a little approval and validation, making her into a little more of a sympathetic figure and not just the big scary mom.

Spike: A Slayer with family and friends, that sure as hell wasn't in the brochure!

Spike kills the Anointed One. Yeay for Spike and Drusilla!
Posted by Mixtress Rae at 7:42 PM