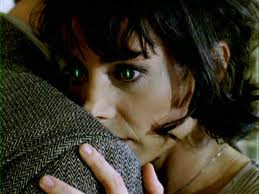 ...as in Giles' Dark Age. This partially explains the sketchy past they hinted at in "Halloween". A demon is possessing some of Giles' old friends because it needs a body to inhabit and they conjured it together a couple of decades ago, or something. At the beginning of the ep you think Giles is gonna get some, 'cause Jenny is being all flirty and talking about making Giles "squirm". But later, Jenny is possessed by the demon and she's way drained at the end and wants some time away from Giles and all the crazy things that happen while being involved with him.

Ew, Buffy is wearing a scrunchie and Giles is drinkin' and gettin' no sleep. First sighting of Giles' apartment. It's so classy. He has an old-fashioned basin-like sink and a tattoo that looks like it's from the Necronomicon. Yes, I know I've mentioned the Necronomicon twice in these entries today, way too many for any normal girl, but I looked through my books today and decided to rid myself of my old copy. It's lame, anyway. Some of the symbols look cool, but that's it. The rest of it is holier-than-thou demon-chanty Aleister Crowley bullshit.

Seeing Jenny possessed is so scary. She's really whiny and pouty too. I can't tell if this is part of her personality or an aspect of the demon within trying to manipulate Giles. Buffy disapproval of Giles. Cold! Don't think we've seen that coldness from her yet. Ok, I have to say it: Ethan giving Buffy the mark of Eyghon tattoo and her immediately getting it removed? How would a teenager have afforded that without asking her mother? Maybe Giles pays for it? Just wish they would have explained it or maybe not let it happen? Just not plausible...perhaps had her get a cover-up later on in the series with something pretty? Sheesh! Angel's here to save the day? Ok, Willow and Xander went to get him...and his undead body houses the demon and vanquishes it. I get it.

I love the zaftig mannequin in the background of the abandoned costume shop! Sexy!

Ohhhh kay. Buffy is using her allowance to get the tattoo removed! Ok, I'll buy that, I suppose. I only got $8 a month when I got allowance, so that would never have covered freaking tattoo removal, but at least they made an attempt to explain it plausibly...
Posted by Mixtress Rae at 8:25 PM