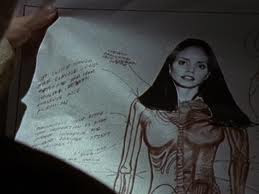 Cute little Buffy/Angel argument. God help me, I think they're cute these days.

So, in this ep there are high school boys trying to assemble the perfect zombie girlfriend for their dead friend/brother they've already resurrected. They've been doing this task by digging up recently dead girls, but they need a very fresh head, so they start hunting live girls.

And they reveal who the boys are by 8 minutes in.

According to Giles "zombies don't eat the flesh of the living". How come in movies when football stars die, the moms always sit in an armchair in their nighties smoking and watching home videos of the kid's games of yore?

Giles is wearing a pink sweater vest...yum. And I think Buffy's braless, and her boobs are better than mine...damn!

Cordelia has the head they wish to harvest. Cordelia in peril in BOTH of the first two eps of the season. They just like listening to her scream. If I were taking a shot every time Cordelia squeals in this episode, I'd be WASTED by now.

Buffy was almost defeated by an undead jock?! What? Why does she seem weaker when fighting (almost) humans? Lame. This is one of the worst episodes ever. Buffy and Angel are acting like bf/gf...holding hands, fighting as if they have a relationship...aw, and Buffy is walking Angel home. How cute is that? Earlier, Cordelia opened a door for Angel too. I wonder if Joss intentionally does little gender role reversals like that on purpose...wait, of COURSE he does.
Posted by Mixtress Rae at 6:48 PM