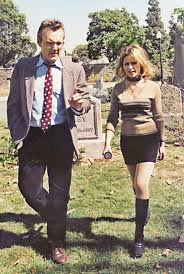 This story arc is about your future and careers, etc. Career Week. "It's a whole week of 'What's my line?' only I don't get to play." says Buffy, who is cranky because she will never get to have a big girl career; she will always primarily be the Slayer. Spike is working on ancient translations of gnarly-looking texts in order to find a cure for Drusilla. She's all weak for some reason, I can't remember. Spike is already showing signs of being seriously obsessed with Buffy.

Xander's aptitude test indicates that he should be a prison guard, Cordelia gets motivational speaker or professional shopper, Buffy got police officer, and Willow is sooo special she gets taken into a back room somewhere and the CIA or some shit tries to recruit her. This is where she meets Oz finally, 'cause he's a super smarty pants too.

Spike actually sicks a team of bounty hunters on Buffy, which I think isn't very characteristic of him because he likes to do the killing himself.

Ohh, I am SOOO excited about Oz!!

There's a lot of emphasis on Buffy's ONEness of Slayerdom. Because Kendra's entrance is in this episode, the Slayer that was called when Buffy died for a second in season 1. First time Giles yells at Xander. I hate it when he does that.

At first when you see Kendra you think she's part of the Order of Taraka, the assassins sent to kill Buffy. Buffy is super-scared of these bounty hunters, so she goes to Angel's house and hides out. Kendra's a bad ass mother effing Slayer, bitch! When I first heard Kendra's accent, I thought it sounded really terrible and fake...some kind of weird fake Jamaican thing, but later I read that she was actually coached by a linguist and it's a very specific accent of some kind. Just to give the actress credit for all you folks watching along with me that are thinking her accent is crap. ;)

Oh, no, Cordelia let the worm guy into Buffy's house. Ew. Angel's trapped in a cage with a sun-facing window. First Slayer-to-Slayer fight.

Kendra is so hot. Killer abs, too. Buffy is very jealous and bitchy towards her, of course. Her territory is threatened.

"A very dark power is about to rise in Sunnydale" says Kendra. This "very dark power" is Drusilla, I think. Once her strength is restored, she's pretty scary. But she's so pretttty. Juliet Landau is a ballet dancer in real life, I think. A little skinny, but that's a ballet dancer for ya. I especially love her makeup. She has a very calculated smoky eye. I want to achieve that!

Willow is one of the only people in the universe that looks good in overalls. She looks freakin' cute.

Xander and Cordelia's first kiss! Third Jonathan sighting! Angel's topless again. This only makes twice, shockingly. Don't worry, I'm counting. So far, the best drinking game would be to drink an entire beer every time Giles gets knocked out. Though, you'd have to watch a lot of episodes at once to get drunk. I should start counting things that take place more often.

Oz and Willow are so cute! Slaying is not a job, it's who you are. That's the message.

At the very very end, you see Drusilla rising from the ashes of the burnt-down church and carrying Spike out. She's in vamp-face, which I am not sure if she ever has touted before, since she's been so weak and stuff.

Commentary (by Marti Noxon) notes added 5.21.13: I went back today and made a few of my older Buffy entries more homogenized and uniform to the more recent ones and I noticed that I started this episode guide blog early 2011, had an entry two days before the tornado (after watching Bridesmaids for the first time that night, actually) then the next entry wasn't until 8 months later (!!!!). 8?! And a lot of those entries from pre-tornado didn't have tags or high resolution pictures, etc etc. So, NOW I'll be obsessed with making those entries better. And then I'll become obsessed with making all my previous entries better...oh boy. Hey, perhaps tomorrow on the two year anniversary of the damn tornado I can distract myself with large pots of coffee and lots of blog editing. There's a plan!

Marti is just talking about filming and writing...I'm just not into writing about the minutiae of writing FOR a TV show. I like to write about the themes of the show and insights into metaphor and all that stuff. So these episodes are all about how B doesn't get to choose her profession, her profession was chosen for her. My mom used to tell me to find out what I want to do with my life or it will be chosen for me, but I didn't become a Slayer. And it's not like I didn't choose either. I'm only 30. I fought to get my job at the library and I've learned a lot about life in the 9 years I've been there. I hope to make money as a writer someday when I figure out how to do that. The funny thing is that I knew I wanted to be a writer as a teenager, but I wasn't focused and didn't do anything with it. All I can do is try harder every day...keep writing. Keep being passionate.
Posted by Mixtress Rae at 9:01 PM

Labels: buffy, what's my line part one and two