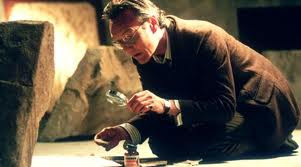 At this point, it seems that they're alternating a semi-serious episode with a fluff episode. Here's another fluff ep. Pretty good-lookin' mummy, actually...accurate, I mean. Cordelia's hair is really light. Yuck. It looks much better as dark brown.

So, this one's about a mummy girl that sucks the life/moisture out of people to stay alive. She takes a liking to Xander, but she's really a sweet girl (mostly) and doesn't want to kill him so she kills other people instead of him. She's very pretty, when she's not a mummy.

Ooh ooh, entrance of Oz! Seth Green with facial hair...weird. And much more talkative than usual.

There's a parallel here between the chosen death sacrifice of the Incan Princess and Buffy the Chosen Slayer, obviously.

Oz notices Willow in her Eskimo outfit. Boys never wear black nailpolish anymore! I miss that! To me it seemed so masculine and sexy. First Jonathan appearance! Xander is too skinny right now; I like it when he's a bit pudgy.

I seem to be getting all taciturn like Oz, so I think that means I'll quit for the day. Goodnight!
Posted by Mixtress Rae at 8:35 PM