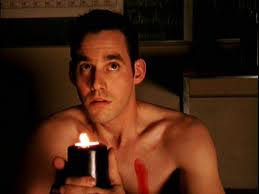 They are intermittently not playing the little "Chosen One" explanation intro at the beginning of the episodes. They did it with the last one, but not the two before, and not this one.

This is the one where Cordelia dumps Xander and Xander enlists Amy to put a love spell on her, but it backfires and infects every female in the school EXCEPT Cordelia. Needless to say, things get feverish and out of hand as everyone throws themselves at Xander.

Ooh, I forgot the reason Cordelia dumps Xander is because her friends are rejecting and making fun of her because of Xander.

And Angel, being evil and all, is going to torment Buffy especially much. He leaves her flowers with cryptic notes...just a little prelude to the evil that Angel will bring upon Giles in "Passion" which is only a few episodes away.

Xander catches onto the fact that girls are hitting on him, that it's a spell, after only girl #2. Jaunty Xander theme! Slow motion Xander walking down the hallway...I wish he would have been wearing his flannel pants and '70s shirt thing. Oh no, Amy just turned Buffy into a rat! Even Drusilla and Joyce are under the spell. At one point Xander has to save Cordelia from the mob of women attacking her and later Cordelia has to save Xander from the mob of women attacking him...and then they're hiding in Buffy's basement again, where they first kissed.

Buffy acknowledges to Xander that she remembers everything that happened and he didn't take advantage of her, even though he could have.

And then Cordelia tells off her friends by calling them sheep and her and Xander get back together! Yeay!
Posted by Mixtress Rae at 8:55 PM