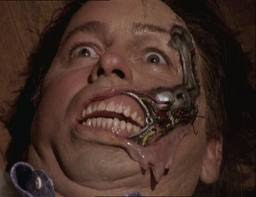 I hate this episode AND the one immediately following it. I usually skip them. This is the one where John Ritter is Joyce's boyfriend and he's a super-controlling robot. I hate mean mom-boyfriends. Mine's had a few. I especially hate it when they think they can be a dad-type and make rules for you. Lame-os. Let that be a lesson to you boys out there: if you EVER date a mom of a teenage kid, do NOT start makin' rules and takin' names right away. Just be cool for a year or so, and then ease into the dad-role-thing.

I'm so sick of Buffy and Angel. Why doesn't Buffy ever date a boy I like? Except Spike, of course, but that's all dirty and wrong and that's not as exciting for me as it is for some girls.

Ugh, and the whole mom-doesn't-believe-the-daughter when she tells her about the stepdad-type crap?! And girls, if you are EVER a mom of a teenage kid and your daughter tells you your boyfriend threatened/hit/sexually abused her, believe her and do something about it fucking immediately!! She might be lying to get attention, but most likely NOT, and don't take that chance. Believe her!

Debut of the brown stretchpants of season 2! Buffy wears these a lot!

This is the first thing I ever saw John Ritter in, therefore, I have to hate him. Taste aversion. Ted hit Buffy and she beat the crap out of him and he fell down the stairs and seemed dead, but ya know, he's a robot, so he's not really dead. Buffy tells the police the truth and they're very condescending towards her.

No, wait, I was wrong in the last post: Buffy also looks cute in overalls. Xander is very rational and comforting to Buffy, something he is VERY good at.

Cute little 1997 Apple laptop. Ted put tranquilizer in the cookies. Cordelia is full-time with the Scoobies now. Now that she's making out with Xander.

Ted's back! This is like a horror movie that's a little too real. Oh no: Ms. Calendar just shot Giles in the back with a crossbow, accidentally. Ladies, also: if a man you're dating EVER refers to himself as "Daddy", get out now! Now! Do not pass go, do not collect $200...get. out.

Giles and Jenny kissin' at the end. Michael made me blog it, 'cause he thinks it's cute.
Posted by Mixtress Rae at 10:52 PM