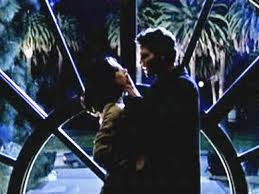 This is the one where Angel kills Jenny and tortures Buffy by leaving her pictures he's drawn of her and her mother. NOW they think of finding a spell to revoke Angel's invitation into both Buffy's and Willow's house; and Cordelia's car, apparently. Giles sums it up: "since Angel's lost his soul, he's regained his sense of whimsy." Angel kills Willow's fish and puts them in an envelope. He's so obsessed with Buffy. His character evil versus good really makes sense. He's creepy stalker protective guy when he's good and creepy stalker murderer guy when he's evil.

At least Xander's wearing plaid pants...that's one of the only comforting things about this episode of torture and scary Angelness.

So, after killing Jenny he sets the stage for Giles at home. There's champagne and opera music playing and a note luring him upstairs and roses and candles. They've never done it and he's super excited because he was expecting her to come over and they'd just recently made up after everyone found out about Jenny being part of the Gypsy tribe...then he finds Jenny dead in his bed. Heart-wrenching to see Giles' face go from happy and hopeful to total dejection.

The score in this episode is beautiful and haunting. And the shots are gorgeous; there's a breathtaking shot where Buffy and Willow find out about Jenny via a phone call from Giles that's shown from Angel's P.O.V. through the window of Buffy's house. They really put some production value in this episode. And the shot where Angel breaks Jenny's neck in front of a big pretty window is also very sticky-in-your-mind. Even Michael, who hasn't seen Buffy even 1/4 as much as me talked about that shot.

Giles takes some sweet revenge. He burns down Angel/Dru/Spike's lair and bludgeons Angel's face with a flaming torch. It's delicious catharsis. And then Buffy has to save Giles and punch him in the face and then hug him and cry. It's sweet.

This episode is really showing Joss' chops and is probably the most cohesive and beautiful episodes so far. It has made my chest physically hurt. Everything came together in this episode, in other words; shots, music, dialogue, even Angel's silly voiceover about passion in the intro and ending is poignant and moving...

"If we could live without passion, maybe we'd know some kind of peace...but we would be hollow."
Posted by Mixtress Rae at 11:36 PM