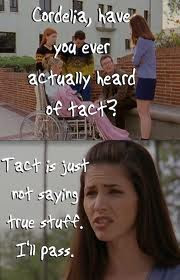 Buffy is sick...she's all sniffly and feverish. She ends up in the hospital seeing a demon that sucks the souls of (mostly) children who can only see him when they're feverish. The hospital looks really dark and dingy. Buffy hates the hospital because her BFF when she was 8 died in one.

Xander is all cute and stays at the hospital watching out for Angel. They have a confrontation when he shows and Xander's manly bravery, even though Angel could kick his ass in three seconds, is so heroicly hot.

Giles: Cordelia, have you ever actually heard of tact?
Cordelia: Tact is just not saying true stuff...I'll pass.

One of my favorite Cordelia lines ever. She's terribly insightful. I love that Xander dates tactless blunt babes, even if they are meant to be audience surrogates. I like audience surrogates, apparently. I was dreading this episode, but it really has a lot of good moments between the not-Buffy characters. Xander is all stalwart and protective of Buffy, Cordelia acknowledges Xander's obsession with Buffy playfully and eventually accepts his want to protect her.

Buffy looks cute when she's feverish. She looks young and they've really underplayed her makeup and wardrobe. She looks beautiful and almost luminous.

Oh my gawd, there's a cacophony of children screaming! Ok, so this episode was cute...except for the cacophony of kids screaming, of course.
Posted by Mixtress Rae at 9:58 PM