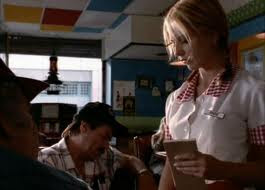 The gang (Xander, Oz, and Willow) is fighting without Buffy as she never came home. Buffy has run away to some nameless town and is living in a sleazy apartment with a job as a waitress. She's going by her middle name: Anne. And when a guy smacked her ass she didn't even kick his! So sad. Oh, and Spagetti-Os out of a can...really sad. Buffy's also wearing white tennis shoes with hosiery...yikes.

This episode is Buffy's last attempt at running away from her destiny, at least physically.

So Buffy's friend Lily's boyfriend turns up missing and Buffy finds him dead...and an old man. Intrigue! Turns out its a cult-thing: derelict-kids get lured into a facility reaching out to homeless people. They get taken to an alternate dimension where time moves differently and they're made to be slaves throughout their lives, even though it's only a few days in the Earth dimension. They're told repeatedly that they are "nothing" so when they're old they get released back into the streets and they wander around all crazy repeating, "I am no one" over and over. So, this whole experience leads Buffy to realizing who she is again, of course. Yeay!

The moral here is that disappearing and attempting to run from who you are won't work. When the demons ask the slaves who they are, they say "no one" or they get knocked out by a big troll hammer; when they ask Buffy, who has heretofore been referring to herself in this town as Anne, she says, "I'm Buffy the Vampire Slayer, and you are?" in a great moment of renewed sense of self. There's some good hero shots in this ep.