Buffy the Vampire Slayer: I Only Have Eyes For You. 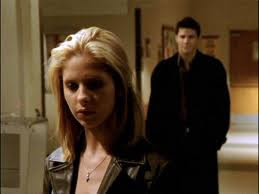 This is one of my favorite episodes. There's a poltergeist spirit in the school. It's of a young boy who was in love with a teacher during the '50s during the time of the Sadie Hawkins' dance. She breaks it off with him because, you know, it's wrong to date a student and he flips out and accidentally kills her, then kills himself. People at the high school keep getting possessed by the spirit of the boy and girl and playing out the last moments of their lives throughout the episode. At the very end, Buffy goes into the school and Angel follows her in. Everyone is worried that Angel will kill Buffy in the poltergeist scenario, but instead, Buffy is possessed by the boy's spirit while Angel acts out the girl's part, but this time the story plays out differently because Angel's a vampire and can't die the way that the woman died. She, as Angel, comes back into the school and forgives the boy, therefore, the boy's spirit can finally move on from repeating the death scenario over and over again. It's really a very moving episode. By the end, you know the lines and you're watching like it's a play, with the added bonus of the quite literal Joss gender role reversal. And you get to see Angel and Buffy kiss again, which I guess was exciting for some, but of course it totally fucked Buffy up, since she's all trying to get over him and shit.

Buffy has WAY too many crucifixes. And her suede go-go dress with the severe slit up the leg would never have flown at MY high school!

And while Buffy is being all boy-hatey, she doesn't know she'll later be possessed by him. This is the first episode where we see Willow really getting into magic.

...he was, of course, referring to the cafeteria filled with snakes.

Giles: To forgive is an act of compassion, Buffy, it's not done because people deserve it. It's done because they need it.

Buffy: No, James destroyed the one person he loved the most in a moment of blind passion and that's not something you can forgive, no matter why he did what he did, no matter if he knows now that it was wrong and selfish and stupid. It is just something he's gonna to have to live with!

Xander: He can't live with it, Buff. He's dead.

Buffy's going in! The plague of wasps parts for her entrance back into the school. James' spirit has been beckoning her throughout the episode. The parallel between James and the teacher-lady is eerily like Buffy and Angel's relationship...well, duh, but it's still really dramatic and powerful. I love it when Buffy calls Angel a bitch. This episode gives me chills.

And then we find out Spike's healed, but he's hiding it from Angel and Dru.
Posted by Mixtress Rae at 10:50 PM

Labels: buffy, i only have eyes for you