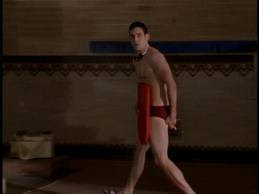 Here's a nice palate-cleanser after the extreme emotionalness of the last episode and before the last two SERIOUSLY drama-filled episodes to end the season. This is just a nice traditional episode about fish-boys on a swim team, drugged by their coach with some kind of fishy steroids.

I'm not sure I'll have much to say about this episode except, yummy Xander in a Speedo. I'm not really into Speedos, but he looks nice topless and wet.

Buffy almost broke the nose/wrist of a swim-boy who tried to take advantage of her. The excuse of the swim-boy..."I mean, look at the way she dresses!" and the swim coach says, "Try to dress more appropriately from now on." I remember THAT from high school. Dressing innovatively and/or with some skin showing equals "asking for it" and being called a slut. Oh, I remember that very clearly.

Cordelia has this really sweet speech when she thinks Xander's a fish boy about how she'll give him bath toys and still date him, etc. Cuteness.
Posted by Mixtress Rae at 11:53 PM