Buffy the Vampire Slayer: Beauty and the Beasts 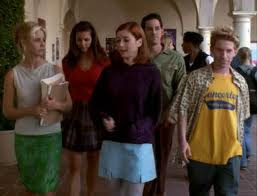 It's Oz' time of the month and he may have gotten out one night. Suspicions arise because of a student murder. It's actually just domestic violence on a very special episode of Buffy the Vampire Slayer.

Xander sleeps through his Oz-watch. At the beginning of the ep, Faith boils it down to, "All men are beasts...they're all just in it for the chase."

Buffy has to go to a shrink because of her running away thing and the guy is surprisingly, to Buffy, cool.

Buffy finally sees Angel. He's totally savage, of course, 'cause he's been in hell and this episode is called "Beauty and the Beasts". Anyway, so at this point you're also wondering if Angel is the killer of the student. Buffy chains him up. Buffy, of course, doesn't tell anyone she's found Angel.

Giles: In my experience there are two types of monsters: the first can be redeemed, or more importantly, wants to be redeemed, and the second is devoid of humanity, cannot respond to reason, or love.

Scott, Buffy's new boy, is totally charming and funny. Too bad Angel's back. Not really; I want Angel to have redemption and shit, but he sure is effed up and broody, when Buffy could date the totally quirky-cute Scott instead. I guess when I was 16 I would have done the same thing. Darkness is interesting when you don't know any better.

Buffy lays out a huge confession to her new therapist and does her Emmy-worthy crying thing only to find that the guy has been mangled. So that effectively rules out Oz-as-werewolf and Angel the Vampire. It is immediately revealed that it's this chick Debbie's bf. He's been drinking some weird potion that makes him all veiny and testosteroney. And she puts up with him. He says typical abusive-male things like "I'm all you've got." and "You know what happens when I get mad." etc.

Pete the abusive boyfriend gets it in his head that Oz was hitting on his gf and tried to kill him but he turns into a wolfy and fights back while Buffy and Faith go after them both. Angel comes to Buffy's aid while Faith and Willow take on Oz, eventually shooting him with a tranquilizer gun. So Angel isn't a total beast then. He deserves, or rather WANTS, redemption. Yep.

Labels: beauty and the beasts, buffy