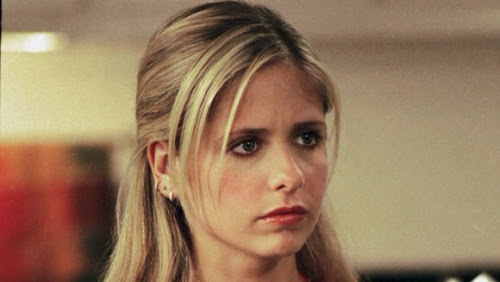 Episode opens with Buffy telling everyone what's going on with the Initiative. Riley barges into Giles' house. Riley recognizes Spike as "Hostile 17". Riley thinks "there must be some explanation". It takes some convincing, and Riley eventually goes off on his own because his whole world has been compromised, poor thing. He's such a bad match for Buffy because he hasn't been through anything bad in his whole corn-fed life. This episode is pretty much the waking up/reality of Riley. Poor dear wandering listlessly through the cemetery. Or was that a dark campus? Regardless, he's brooding. The gang is all hiding out at Xander's, which is super cute, 'cause they're all watching cartoons together in their jammies and Giles is sleeping in a bean bag chair. Buffy makes a rousing speech in her "yummy sushi" pajamas, which is also super cute.

Ok, I guess Riley hasn't quit the Initiative. He's still uncertain, especially when he finds out Walsh is dead. He is still pretty loyal, however, when his BFF suggests Buffy killed Walsh. Self-righteous Buffy speech, probably her first to Riley. Willow is already getting into spells that Tara doesn't think they're ready for. Joss knew what he was doing two years ahead of time. I can't imagine that kind of narrative foresight. Perhaps one day I'll get there. I need to get back into writing my novel. That sounds so pretentious, "my novel". Riley is getting mean. Cracked out. His moral compass is all out of whack and he's very distressed. All shaky and shit, questioning everything. Feverish. Poor little soldier.

Willow and Tara are doing sexy demon-finding spells. Tara foils the spell, unbeknownst to Willow. Xander and Buffy go into the Initiative undercover, which is funny because Buffy obviously looks like Buffy. Riley wakes up after fitful fever-crack sleep and pushing Willow down to get past her. Buffy is simultaneously overhearing the Initiative bigwigs talking about how the boys were getting meds in their food, including Riley, so he's essentially going through withdrawals. Buffy confronts bigwig scientist guy as Riley shows up. He accuses Buffy of doing something to Walsh and then Adam shows up with a little existential monologue. He's part robot, man, and machine. Cool. Riley has been programmed by Walsh, apparently. Though at this point we don't know what that means, whether it's metaphor or something more tangible. Adam beats everyone up and leaves. Initiative dudes come in and take Riley away to a "military hospital" and Buffy isn't allowed to follow. Spike is getting beat up at the demon bar because the demons know he's been fighting them lately. Poor Spikey doesn't live in either world.

And I suppose Spike's journey is a parallel to Riley's? I never thought about that. This whole season is everyone being out of place, transitioning, reestablishing their belief systems and where they fit in adult life. Adam is even questioning where he fits as he's man, machine, and demon. Who will accept him? Who is he? The Existential Big Bad. Clever.

Posted with Blogsy
Posted by Mixtress Rae at 7:07 PM