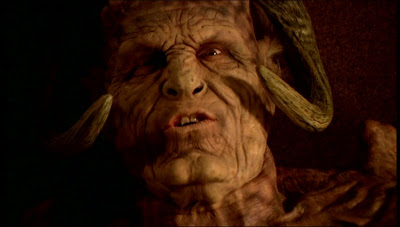 Ew, Riley and Buffy are making out. It's Buffy's birthday episode and Giles wakes up a demon after hanging out with the no-good Ethan Rayne. Duh, Giles, what were you thinking?

The theme here is that Giles feels out of place in this new world and doesn't have a job currently. Everyone keeps bringing him cake. Ooooh, Buffy says Professor Walsh is the "smartest person" she's ever met. Spike is a "new man" too as he's moving out of Xander's basement into his own crypt.

I knew the moment Professor Walsh was mean to Giles that she was no good. I can completely understand why Giles was driven to drinking with Rayne after the day he had. They used to be friends.

Riley is, surprise surprise, having a hard time accepting that Buffy is stronger than him and has fought a lot more nasties than he has.

Giles doesn't even wake up as the demon until 21 minutes into the episode. Poor thing crushes the phone when he picks it up and rips his jacket and the door off the hinges. Riley tries to "pull rank" on Buffy and say she can't come along when the military get involved in helping find Giles. Of course she doesn't take that crap. He's going to learn real quick how things are with bossy Buffy.

When they find Giles as Fyarl demon, of course Buffy thinks the demon was the one that hurt/kidnapped Giles, so she fights him. But eventually she sees in his eyes that it's Giles. So sweet. Then the episode ends with a rebonding conversation between Buffy and Giles while Riley is having a simultaneous conversation with Walsh about basically the same thing (both Giles and Walsh are warning their progenies about the other.