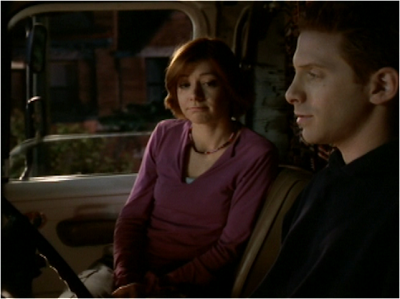 Tara and Willow holding hands. Oz shows up out of the blue. He's only really been gone six months. Riley is close-minded about Willow dating a werewolf. "I never knew you were such a bigot!" Oz can now control when he's a wolf through meditation or something, 'cause it's a full moon and he's still Oz. He wants Willow back. It would be really hard to choose between Oz and Tara. I heart Oz so much, but Tara is such a sweety-pie. I like Willow and Tara together better. I'd like to keep Oz for myself and while we're living in an alternate universe I'd like Tara to not get shot in season six by Warren and her and Willow to be together forever.

Willow tells Buffy about Tara and Buffy reacts well. Willow doesn't know what she wants to do. She goes to see Tara after talking with Oz all night and tells her she doesn't know what to do and then Oz runs into Tara later and "smells" Willow on her. He turns into the wolf when he realizes Tara is a "threat" to him. The Initiative dudes tranquilize him and take him away to a cage in the Initiative. Riley almost kills wolf-Oz when he turns back into Oz. Adam's been talking to Spike. Promises him he'll get his chip out if he helps him with something or other. Help him kill Buffy probably...I wasn't paying attention to the specifics.

Poor Oz is naked and alone. Riley tries to get him out, but they stop him and lock him up too. Why the hell is he still hanging out with those dingbats? Some high-ranking officer says mean stuff about Buffy and basically gives him the choice to help them take her down and then his "good name" will be restored. He calls them "the Slayer and her band of freaks" and "anarchists". The freaks go to infiltrate the Initiative while Giles and Anya do some computer hacking from Giles' house. They realize when they get there they have to save Riley AND Oz. Riley says "If I leave now I can't ever come back." Buffy stares at him. "I just wanted to hear it out loud." So, finally, he's done with the dingbats! Woo hoo! This somehow means Riley and Buffy have to stay in the burned out high school. Buffy finally tells Riley about her past with Angel.

Willow and Oz need to talk now. He missed his chance. She tells him some part of her will always be waiting for him. Closure. She goes to Tara and there's suggested makeout, but you don't get to see it because it's the year 2000 and girls can't kiss onscreen yet. They won't get to until Joyce dies in season 5.
Posted by Mixtress Rae at 1:23 AM