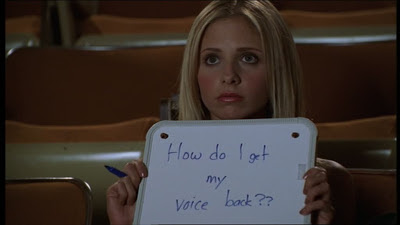 It's been so long since I've done one of these. Of course, this is a legendary episode, so that means I've been avoiding it. Always thinking I really have nothing to say...which is ironic because this is the episode wherein no one CAN say anything. I'm sitting very close to the TV in my bedroom and you can really tell this show was shot before the times of high-def over-intensity. Plus, this show was filmed so dark. Typical Whedon stuff; at the beginning of the episode everyone is at a loss for words, not communicating well, etc.

I think this is the introduction to Tara. She's so cute. Blond zig-zaggy part and sweet smile.

Yeah, Giles is getting some! I like that Joss started showing Giles' full life after everyone got out of high school and didn't shy away from the more adult aspects of it. The appearance of his "orgasm friend" always made me happy to know that Giles maybe had a "Like Crazy" love from overseas that he sacrificed in order to help Buffy in America and fight the good fight and all that.

The moment where Willow and Buffy realize they can't speak when the music comes in still gives me chills. And it's remarkable how believable it is that they're really trying to speak and can't. I wonder if they filmed it with them actually speaking and then removed the sound in editing. And you can tell everything they're trying to say too. So cool. And then Xander calls Buffy before, duh, he remembers he can't talk, which is the whole reason he was calling her. That would totally happen. Before the era of the text. Hard to believe that this episode aired over 13 years ago. Ok, I just cried. WTF. I cried when Giles put his arm around Willow after she wrote "Hi Giles" on her little message board. What is that about?

Riley and Buffy's first kiss. Whatever. The Gentlemen really are super silent movie glide-y creepy. Love it! Is that Eric from "That '70s Show"? No. Buffy's just walking around campus with a freakin' crossbow. Buffy and Riley are fighting alongside one another. So many questions. Again, whatever. Much more interested in Tara and Willow. Or Xander and Anya. Or Giles and Olivia. Poor Spikey is the only one all alone in this episode. "Hush" doesn't seem quite as innovative today, but back in 1999 television was still on the cusp of becoming great, but was actually still pretty formulaic. I'm sure this, along with several other groundbreaking Buffy episodes, was pretty influential for a lot of the great TV shows of the present...

Commentary (by Joss Whedon) notes added 5.15.13: Joss wrote this episode because he felt like he was getting stale as a director. He's telling the tale that with this episode, and with "Restless" and witch "Once More, With Feeling"...each time he felt like he couldn't do it and no one would get it and everyone would be bored and it was impossible, etc. And this and those other two episodes mentioned are among my top five...indeed they are THE first three I'll (and most other fans) will mention when asked my favorite Buffy episodes, not that anyone ever asks (I wish!). That is encouraging to me to know that he felt it was impossible, but he did it and it was awesome.

The theme here is that once you stop talking, you start communicating. Sometimes language gets in the way when you're trying to convey things to other humans. Xander can't tell Anya how he feels about her as she wishes. Buffy can't kiss Riley because they're nervously talking too much. Giles just wishes everyone will shut up. The Wicca group misusing the word "empowering".  The image of the Gentlemen floating towards the boy in the bed came from a dream of Joss'.

Sometimes when you shut up, you learn more about yourself and others than you expected to.
Posted by Mixtress Rae at 8:04 PM