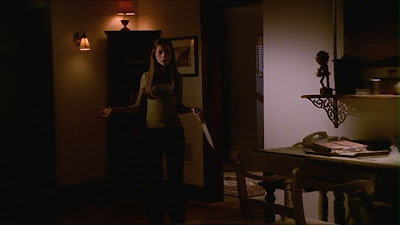 It's Buffy's birthday again. 20. Glory is a crazy hellgod. Being not from this dimension she has to eat brains to sustain her form in the human world. Willow and Xander start asking about finding the Key before Glory does. Remember, they still don't know about Dawn. Only Giles, Buffy, and Joyce do. Buffy reveals she and Giles know, but didn't want to put them in danger by telling them. She decides it's time to tell them after Xander points out they always put themselves in danger.

"There's something that you need to know about Dawn."

The knights of Byzantium are chanting when the Glory-minions show up to fight them. The knights mostly kick their asses. Glory shows up and kicks their asses. Willow and Tara are doing a spell to protect the Magic Box, alert them to the presence of any hellgods in the vicinity. Everyone is acting weird around Dawn.

Glory is torturing one of the knights to ascertain the whereabouts of the Key. He doesn't know and refuses to tell her anyway, so she eats his brain.

Buffy is opening presents. Dawn gives her a homemade frame with shells they found on a trip to the beach. The picture inside is from the trip to the beach too. Everyone gets all mysteriously quiet. Dawn notices everyone is weird around her and confronts them all about it; no one says anything helpful.

She goes to her room and slams the door, then sneaks out, runs into Spike. He's there with a present for Buffy. She tells him she's headed to the magic shop to break in and steal things. Spike decides to go with her. She wants to find a book Giles hid in her presence. The book is Giles' journal/notes on the Key. Dawn reads it aloud. She finds out she's the Key, obviously. "Guess that's you, niblet", says Spike.

Party has mostly wound down when Dawn shows up having cut her own arms. "Is this blood? Am I real? Am I anything?" Buffy and Joyce tell Dawn the truth about everything. They're very forthright. Buffy finds out Spike is the one that got Dawn into the magic shop and goes to beat him up, as per usual. He tells her he went along to protect her. "If kid sis wants to grab a midnight stroll, she'll find a way sooner or later. I just thought she'd be safer with Big Bad looking over her shoulder." He defends Dawn and suggests that Buffy shouldn't have kept her in the dark so long.

One of the minions confronts Ben. Tells him he needs to stop defying her. Ben tells him Glory can't "lay a finger" on him and they know it.

Dawn is burning her old journals alone in her room. She was suspended in school. She destroys her room. When Buffy and Joyce find the fire, Dawn is gone. Buffy calls a meeting and assigns everyone a side of town (in twos) to look for Dawn. For some reason, Spike is at the meeting. Does this mean he's finally been let in? Anyway, her and Spike are the twosome for their part of the search. Why wouldn't she put Spike with one of the less physically-able peeps? She divided them up as to who would want to hang with who the most, it seems. Well, except Xander/Giles, but they're just hilarious together. Narrative pairings, really, then.

Can you imagine having all these memories of your life, but they're not real? Everyone else is wondering the same things. Buffy tells Spike he was right about telling Dawn earlier, but Spike makes her feel better by telling her she's not only a ball of energy, but also a fourteen-year-old "hormone ball", so she may have reacted this way no matter how she found out or when.

Dawn's wanderings lead her to the hospital. She goes to the mental ward and all the patients know it's her, ironically. The ones that Glory debrains are the ones that know who the Key is. Dawn starts asking them questions about what she is. She runs into Ben and he comforts her over a cup of hot chocolate. Dawn reveals everything to him. Ben tells Dawn to get away from him because "she always knows". Then you see Ben turn into Glory for the first time. Glory wants to know what Ben was doing with Dawn and takes her somewhere more deserted in the hospital. Glory asks her if she knows where the Key is. Dawn asks her what it looks like and she says it's a "bright green swirly shimmer". She presses Glory for more information on the Key. It's been around for a really long time. Glory gets angry after all the questions. Gets a little crazy. Thinks about eating Dawn's brain when Buffy and everyone show up (after they reconvened, Buffy decided to check the hospital).

She's thisclose to killing everyone when Willow does a teleportation spell on Glory. Buffy tells Dawn she loves her because she's her sister and her blood is Buffy's blood. Makes her feel a little better. Willow has a wicked nosebleed from the spell. Dawn tells Buffy Ben was there...but he must have "left before Glory came". She doesn't remember Ben is Glory.
Posted by Mixtress Rae at 7:10 PM