Buffy the Vampire Slayer: The Killer In Me. 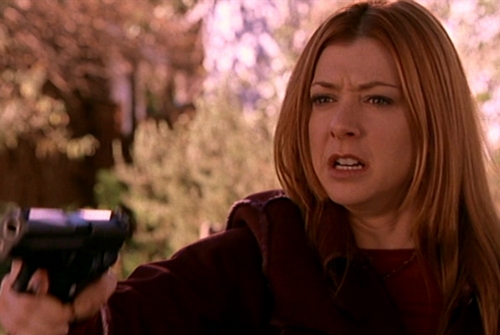 Giles is still not touching things. I didn't realize they dragged it out this long. Giles is taking the girls out to the desert for a vision quest like the one he took B on in season 5. Spike is chained up in the basement. Kennedy faked the flu to stay home with Willow. Spike's chip starts malfunctioning, going off without reason. Kennedy takes Willow to the Bronze on a "mission". A mission that's really a date.

Spike is dealing with some intense neurological pain. Kennedy and Willow are relating. Buffy is trying to call Initiative dudes. When they get back to the house, Kennedy kisses Willow. Willow turns into Warren during the kiss. Kennedy is freaked out. Willow looks in the mirror. She runs downstairs and everyone else freaks out. Willow thinks she brought it on herself because she feels bad about killing him. Buffy offers to help. Willow says she'll figure out how to fix it herself. Kennedy follows her. Buffy and Spike go to the Initiative caves. Spike thinks there might be some sedatives down there, 'cause they used them on him before when he was captive there.

Xander gets a call from England. The Council-guy describes the sitch we saw with Giles' head almost getting an ax in it. They (Xander, Andrew, Anya, and Dawn) realize they haven't hugged him or seen him touch anything since he arrived. They have to find him in the desert, since he's alone with the girls. That's so lame that he couldn't touch anything for like 4 episodes. He seemed weird the whole time. Shouldn't have dragged it out so long.

Willow goes to consult with the old Wiccan group she tried to join when she was a freshman. Amy is there and she apologizes to Willow for being a bad friend and shizz. The group tries to help. Willow calls Amy a "dumb bitch" and slaps her. The "glamour" of Warren is making her turn into him.

Wouldn't there be like, NO oxygen in the Initiative after 3 years being sealed off? They hear something, decide something must have survived. Kennedy pokes around after the Wiccas disassemble and Amy mentions something about Kennedy being a Potential, when she hadn't mentioned that. "Oops" says Amy. WillowWarren is buying a gun.

Everyone attacks Giles in the desert. It's funny. He's not the First.

B kills the thing in the Initiative. Then all the lights turn on and the combat dudes show up. Riley has sent them to give Buffy whatever she needs to help "assface" (what Riley called Spike). The dudes give B the choice to either repair the chip or take it out. Big decision, B. Whatcha gonna do? Time to work without the safety net?

Amy tells Kennedy she did a penance malediction spell. Willow's subconscious chose the way she'd be punished. Amy is jealous of Willow. Amy transports Kennedy to B's backyard and WillowWarren shows up with the gun, trying to reenact when he killed Tara and shot Buffy. Kennedy talks Willow into triumphing over Warren. Willow feels super guilty about kissing Kennedy, because it means she let Tara be dead. Kennedy kisses her back into Willow. Lame.

Commentary by David Solomon and Drew Greenburg- I'm almost thinking it's not worth my time to listen/watch the commentaries not done by Joss Whedon. It's mildly entertaining to hear their cute stories about what happened during the filming of the episodes, but I feel idle when I have nothing to write about, like now. When I originally wrote the blog above, I had a lot more to say. Usually in these commentaries, which is why I haven't watched many of them until now, there's a lot of stroking each other's egos. "You acted so well in this scene!" "Sarah did incredible here." "Remember when you broke your finger and couldn't shoot this scene?" Which is all normal stuff people that made a thing would say while watching the thing, but not particularly interesting.

Every single scene with Warren/Willow was shot (every line AND every angle) by both actors. In the Initiative scenes when they were lit with only flashlights, the camera-operators were wearing mylar so that when Sarah and James shined the flashlights in their direction it reflected back at them. Cool.
Posted by Mixtress Rae at 1:18 AM