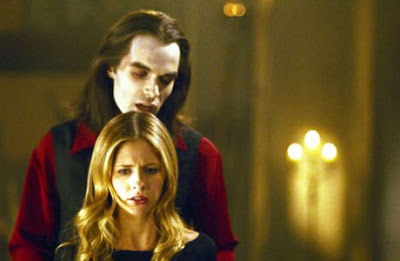 If I remember this episode right, it's pretty cheesy...fluffy.

Buffy already has to get up in the middle of the night to kill things in order to sleep through the night next to boring Riley...oops.

There's a beach scene...possibly the only one ever. I guess I get why they had to address the Dracula issue, but it seems a little like Joss might have been humoring one of the writers...it doesn't really fit into the narrative. Giles is doing a lot of archiving and labeling things. He tells Willow, in secret, that he's planning to leave Sunnydale. Going back to England. He's trying to make sure they have everything they need (his books archived into the computer, etc) for when he leaves. It kinda hurts in the chest area thinking about Giles leaving.

Buffy is sort of obsessed with slaying right now. Dracula shows himself. He's very Anne Rice: pale, pretty, long hair, alluring. I love that Buffy always uses their summers off as real time. It's always actually been as long in their world as it was in ours. So, they've had a summer off school, etc. Buffy tries to slay Dracula but he disappears in vapor, to reappear and then disappear again as a bat. When they're telling Giles, Anya, and Tara back at Giles' they're all starstruck and the girls all think he's sexy.

Ok, maybe the reason for the weird Dracula episode is to show that the world is slightly off as a precursor to Dawn who'll show at the end of the episode. Dracula can also, apparently, turn into a wolf. He shows himself alone to Xander in order to bewitch him into servitude, his "eyes and ears in daylight", with the promise of becoming immortal. Odd. Poor Xand-y.

Riley ends up in Spike's crypt for some reason...oh, he wants info on Dracula. Apparently, they're old foes and Spike laments that Dracula's fame outed the vampirekind secrets. Riley is being all threatening to Spike. He's obviously very insecure after no longer being Initiative dude whilst Buffy is still his "super honey".

Dracula enters Buffy's bedroom and bewitches her. He calls her "kindred", a "creature whose darkness rivals" his own. He actually is really pretty. He bites Buffy and it's all sexy and she has to wear a scarf the next day. It's nice seeing her in her old room. Xander is all twitchy and hilarious: "like any of that is enough to fight the Dark Master...bater." Xander eats a spider. Riley pulls off the scarf, outing her to everyone. She's "under the thrall of the Dark Prince". They decide Buffy can't be alone with him so she's going to stay with Xander-the-bug-eater while Willow and Tara do a protection spell at Joyce's house (it turns out she was the one that invited him in for coffee in the first place). Xander takes her to Dracula of course, then Giles and Riley break in. Buffy is having trouble fighting Dracula. She's fighting the "thrall". Dracula is talking a lot of sexy at Buffy about what her "body is capable of" etc. Dracula offers her his blood...

Riley finds out about Xander and knocks him out. Giles falls into the "chick pit" aka Dracula's three sisters. They seduce him. Dracula convinces Buffy to drink. She really does want to. He says the thing Tara said to her in the dream: "You think you know what's to come...what you are. You haven't even begun." She has a vision while she's drinking of the First Slayer and other stuff. She finds her strength after the blood drinking and fights him. Riley rescues Giles. He tries to go back and he says, "No sir. No more chick pit for you." Cute.

They catch up to Buffy after she's staked him. Xander makes a cute speech about how he's sick of being everybody's "buttmonkey". Dracula re-solidifies, Buffy stakes him again, he tries to reassemble again...she says, "I'm standing right here!" and he stops. So she hasn't bested him. He's still in the world, but this makes him decide to leave her alone.