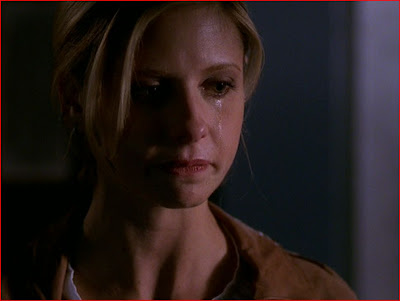 Today is the day I finish this Buffy project. Bittersweet, really.

Everyone is leaving town. Even the regular folks know it's time to get out of Sunnydale. The realest Apocalypse. Buffy isn't just going to hold back evil for a bit this time. She's going to change the world.

Buffy and Willow are at the hospital with Xander. Buffy is bailing to work on Apocalypty stuff. Xander is making jokes already. Willow tries to go along, but she starts crying. Restore Xander's goddamn eye, Willow!! This is a mystical eye death. You can fix this.

Morale is bad. Everyone feels hopeless. Anya and Andrew are trying to update the Potentials on how to kill the Ubervamps. Dawn starts asking tons of questions about how Xander is and Buffy evades. Tension everywhere. Buffy decides to leave soon after she arrives. Faith is holding down the fort, so to speak. Buffy goes to the school alone, the way she feels. Alone. Chosen ONE. She sits at her desk and cries looking at a picture of her, Willow, and Xander. Caleb comes in, mocking her crying "just like a woman". They fight. Short fight. He knocks her out and leaves. The bad guys never take their unconscious Slayer opportunities like you'd think they would.

Giles has a mission for Spike. They've found something out about Caleb, sending Spike to investigate...sending Andrew too. Faith suggests taking everyone out to blow off some steam. She takes 'em to the Bronze. Buffy gets home and everyone's out but Giles. Buffy is upset Giles sent Spike out without her input. "You sent away the one person that's been watching my back." That's a bit of an overstatement, B. She's making herself "other" when she doesn't have to be. She's also pissed that Giles let Faith take everyone out. The cops try to take Faith away on outstanding warrants. She goes outside with them and they pull guns on her. A few of the officers stay inside and keep everyone else locked in so they can't help Faith. The girls stand up to the officers and get outside to help Faith who is being beaten. Buffy arrives, tells the girls to go home, then "has a talk" with Faith. Faith suggests the girls need to mess up sometimes. Buffy is talking about the girls' safety and Faith brings up the fact that they weren't very safe when she led them into the vineyard. Good points, F! B punches her, then leaves.

Andrew is riding on the back of Spike's motorcycle. It's a bit of a road trip wherever they're going. Wood and Faith meet. There's gonna be a big meeting at the house. Xander gets home from hospital.

Buffy has a plan to go back to the cellar. Spike and Andrew arrive where they're going. A church that took in Caleb a bit ago. An inscription on the wall in a secret room in the church got Caleb all angry. He killed everyone but this one guy. The inscription says, "It is not for thee. It is for her alone to weild." The power. The Slayerness.

B thinks they need to go to the cellar because the bad guys always go where the power is and no one has been protecting the Hellmouth or the seal, only the wine cellar, so this must be where the power lies. Faith says no, they shouldn't go back in there without proof. Giles weighs in next. Buffy gets defensive and asks Giles if he sent Spike away so everyone could "ambush" her. Willow also says she's  worried about B's judgment. Buffy tells them it can't be a democracy, unfortunately, because democracies don't win battles. "There needs to be a single voice....you need someone to lead you." Anya replies, "And it's automatically you." Xander next. We all need to realize that, like it or not, Buffy is the reason two girls are dead and Xander's eye is gone. Buffy is standing her ground about "being together on this" and unwilling to compromise her plan. She tells them to fall in line. Someone suggests Faith be in charge. Faith recoils and says B just needs to "take a siesta". Kennedy suggests a vote. Buffy says "I can't stay here and watch her lead you into some disaster." Dawn tells her "Then you can't stay here." They're ousting her. Faith goes out to talk to B on the porch. B tells her "Don't be afraid to lead them."
Posted by Mixtress Rae at 4:54 PM