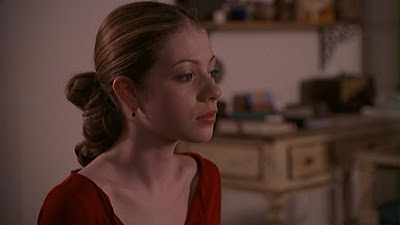 Spike is being used in a lesson. He pretends to attack the Potentials while B teaches them skills. There's some sexual tension between Buffy and Spike. I know this makes me a big girl, but some of my favorite scenes are the ones where Spike gives one of his "you're a helluva woman" speeches to Buffy.

Giles thinks the First is in remission for a bit. Buffy is doing another speech about it. Telling the Potentials they're special. Dawn is sitting on the stairs feeling left out because she's not one of the Potentials.

Willow just got news. A Potential is in Sunnydale according to someone in the coven. B is taking all the Potentials out for a group patrol. Willow is doing a spell to lead her to the Potential in Sunnydale. The light hits Dawn so they think she's a Potential. It's a big deal. Dawn has to process. She sneaks out.

B takes the Potentials to a demon bar. They run into Clem. Dawn runs into a friend from school. She got attacked by a vampire. She trapped it in a school-room and ran away. She was on her way to Buffy's to get her, because people talk. So Dawn and her friend (Amanda, I think) go back to the school. Dawn thinks she can fight it, since she's a Potential. The vamp is after them now that they've opened the door. They run. Dawn hits it with a fire extinguisher.

B is giving the Potentials a tour of a crypt. A vampire wakes up, recently turned. Buffy is telling them to know their environment and how to use it. As she's saying this Dawn is fighting pretty valiantly in the chem lab. Buffy and Spike lock the girls up in the crypt to kill the vamp on their own. As Dawn and Amanda are fighting the vampire a bunch of Harbingers show up and grab Amanda. This is Dawn's moment of realizing she's not the Potential, Amanda is. But the really cool thing is that even though she's not, she was the one fighting while Amanda was cowering in the corner. Dawn believed she was a Potential. Maybe there's not something totally special about the girls called. Dawn can fight because she believes she can. Because it's all about knowing your own strength, your environment, all that stuff Buffy said. So now, not only are Dawn and Amanda fighting the vampire, they're fighting the Harbingers. Dawn surrenders her weapon to Amanda who does some serious damage all of a sudden. Buffy shows up with Spike, Xander and Willow. Buffy is never told they thought Dawn was a Potential.

Xander gives Dawn an extremely moving speech about how they (Potentials, Buffy, Magical Willow, Werewolf Oz, all their friends with special powers) will never know how it feels to be ordinary, like he and she are. He tells her he saw how she handed the reigns to Amanda the second she realized Amanda was the Potential. He said, "You're not special, you're extraordinary." It was great. Really wonderful moment. I gotta wonder if Joss knew about them already.
Posted by Mixtress Rae at 12:22 AM