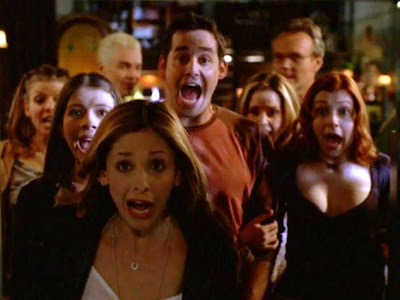 Buffy in cemetery...runs into Spike. Spike wants to talk about the kiss and B is being avoid-y, of course. She's wearing all white, like she's trying to be pure as the driven snow and shit. A shark-headed dude that seems like a mob-leader shows up to hound Spike for kitten-poker debt. Ah, she's wearing leather pants with a white sweater set thing. The attempt at purity with a base of shiny black darkness.

Tara, Willow, Xander and Anya are having dinner together. Anya is wondering what it was like for Buffy in heaven. Willow is feeling guilt and Tara is comforting everyone. Tara is always the voice of reason. Xander feels weird to feel weird about his friend not being dead. Willow suggests doing a spell for Buffy to forget she was in heaven. Tara gets upset and they fight. Finally confronts her about the spell she used to make Tara forget the last fight they had about magic. She asks "How could you violate my mind like that after what Glory did to me?" She says a lot of very insightful things. Willow whines after Tara starts to break up with her and says she'll go a month without magic, says she doesn't need magic, just Tara. Tara asks her to go a week and then "we'll see". It's definitely not an ultimatum, because Tara seems unsure even making that assertion. She suggests they take some space.

Giles is telling B he needs to go back to England. Buffy is throwing a fit. "I've taught you all I can about being the Slayer and your mother taught you what you needed to know about life. You're not going to trust that unless you're forced to stand alone." Amen, Giles. I HATEHATEHATE to see him go, but if more parents said this to their children, we'd have a lot more self-sufficient human beings in this world. She storms out, but Giles remains strong, because he's a stud.

The next morning Willow immediately does a spell to get dressed super quick and another forgetting spell for Tara and Buffy, to get Tara to forget she's mad at her and Buffy to forget heaven, of course. "Tabula Rasa" (blank slate) she chants. The spell takes a bit to take effect, so they're all at the magic shop talking when it happens....to all of them instead of just Tara and Buffy. Buffy's in the middle of a dramatic speech (as Giles is trying to delicately tell them all he's leaving again) when they all pass out for several hours possibly, because it's dark when they wake up. No one knows who they are. Anya and Giles are leaning on each other and Anya has the ring, so they think they must be engaged. Willow is wearing a jacket that belongs to Xander so they think they might be together. Spike is wearing a weird tweed suit as a disguise because he was hiding from the mob-shark dude, so he thinks he's Giles' son because they kind of hate each other and are both British. B instinctively sticks with Dawn and takes care of her. Willow and Tara are still attracted to each other.

Giles calls magic "chicanery". Dawn has a necklace with her name on it. Spike thinks his name is Randy because that's what his suit says on the inside. Anya finds the papers that show her and Giles own the shop together. Xander, Willow, and Tara all had IDs on them. Buffy names herself Joan. Dawn makes fun of the name and they annoy each other, so then decide they're sisters. Some monsters are at the door. They scream and hide. Joan discovers she can kick ass and dust vamps. Xander passes out. Joan tells everyone their jobs, as per usual. Randy decides he's a superhero too, but he's vamp-faced and oblivious to it. Joan runs away from him after seeing vamp-face. Giles finds the one-way airline ticket in his pocket, so he thinks he's leaving Anya. Randy decides he's a noble vampire, a "vampire with a soul", since he doesn't want to bite Joan and is fighting other vampires. Joan says, "A vampire with a soul? How lame is that?"

Anya is trying to help with spells, but she just keeps making bunnies, which she's scared of with amnesia too. Bunnies all over the shop. So cute. Giles is swordfighting a skeleton. Anya is making a mess of the spells. They're fighting, hits Giles over the head with a book. Giles says "no wonder I'm leaving you!" Anya throws the ring. After Giles fixes everything he apologizes to Anya. They kiss and make up. Tara and Willow almost kiss.

Xander accidentally steps on the crystal that was part of the spell, so now everyone is back to normal. Tara pushes Willow away from her in anger, immediately knowing what she has done. Buffy gets confused for a second and knocked down by a vamp while Spike takes care of everything. Anya and Giles push away from each other with disgust.

Xander is with Willow, Tara, and Dawn in a tunnel for some reason and tries to laugh it off to break the tension, but they all wordlessly know it was Willow. It's so sad that no one even confronts her. It's like they've all accepted how alone they are and how fucked everything is. Tara is obviously done with Willow, though she looks very sad. Buffy is really sad. There's sad Michelle Branch at the Bronze, where B is moping. Tara is packing up at the house. It would take incredible strength to leave everything familiar like that and move on.

Giles is leaving without any goodbyes. Everyone is so alone. Spike tries to comfort B, but she turns her face away from him. Dawn is very upset that Tara is leaving.

Apparently, B went after Spike, because they're making out at the end.
Posted by Mixtress Rae at 11:03 PM