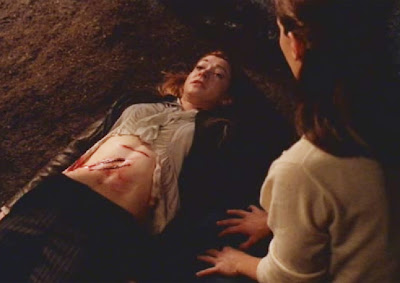 Before I start this ep, I wanted to mention that I read an academic paper on the character of Spike today (slayageonline.com) and the author (Andrew F. Herrmann) mentioned two reasons Spike was never looking to get his chip removed, which are both totally DUH. Why didn't I think of them? So, the first reason is that in Buffy they've always been very clear about the human/mystical rules. Human deaths have to be dealt with by human rules and vise versa. Spike's chip is a human device. He would not have gone to a shaman to take the chip out of his head. I was completely distracted by the plot device of Spike saying over and over that the Slayer will get what she deserves. It just threw me that Spike would be using the same language he has always used when his intention was to KILL the Slayer. And he kept calling her "bitch" too. If he was as remorseful as we now know he was, why was he using that language? The only reason is to make us, the audience, THINK his intentions were other, and that's just cheap. Anyway, the second reason Spike was for sure intent upon a soul (and I REALLY feel like a dunce for this one) is that he could hurt Buffy with the chip. He didn't need it to be removed in order to kill her, if that was his intent. I feel sooo stupid for that one. So Spike's character growth (with respect to Buffy) is essentially thus: he was obsessed with killing her and failed, so the want to possess her changed from kill to fuck...then after being neutered he learned a bit of what it's like to be good, so that fuck turned to love and then when he realized even while in love with the girl he could still have it in him to try to rape her, he had to change. He had to BECOME the "man" he was on the precipice of becoming for the last couple of years. Cool.

Ok, on with an episode NOT entirely to do with Spike: Dawn, Xander, and Buffy are waiting for Willow at the airport. Xander is bragging about how he saved the world with his mouth (talking). They don't see her get off the plane.

We see the scene replay with Willow getting off the plane, not seeing anyone waiting for her.

A demon attacks a graffiti artist.

Willow arrives back at Buffy's. Her old room is now Buffy's, I think. No one is home. The guys get home at the same time she did, but don't see her. So they can't see or hear her. Or feel her, because they're sitting on the same couch she's laying upon. Except Willow hears the door shut when Xander closed it and they hear something upstairs just as they shut the door. Why would they hear that, but not anything else? Willow sees Anya. Anya sees her back. She's remorseful about the destruction of Anya's shop, which she is still cleaning up. Anya's wearing labradorite, I think. Willow goes to find Xander at his site, but doesn't see him. She finds a de-skinned guy that Xander and Buffy are looking at too. Xander and Buffy are suspecting maybe Willow did it. Willow goes to the school to find Buffy, or Dawn, or Spike (Anya told her Spike's "insane in the basement".). She finds Spike. Spike is talking to both Buffy and Willow, but since he's crazy, no one thinks anything of it. "Everyone's talking to me. No one's talking to each other." Now we see it from Xander and Buffy's POV. Again, why is he in the basement of the school?

Willow goes to Anya's apartment for help. I heart Anya, reason 357:
Willow: So, will you help me?
Anya: Is it difficult or time-consuming?

Anya and Willow do a spell to reveal all the demons in town. The Hellmouth section on the map catches on fire. Willow asks Anya to teleport to a spot on the map she thinks might be the thing that killed the boy and Anya says she's only allowed to teleport on official business now and that her job isn't as fulfilling as it used to be. "Turns out it's really upsetting." They kind of bond. Dawn, Xander, and B are in research mode. Dawn finds a demon that paralyzes its victim, then uses its huge fingernails to strip the skin off him/her. They decide to use Spike to lead them to the trail of blood that the demon had to have tracked back to its lair. Spike leads them to a cave. Willow finds it too. Dawn gets slashed by the demon and they take her out and seal the cave, essentially sealing Willow in. The demon is taunting Willow, talking about her friends leaving her to die. Buffy calls Anya to come watch Dawn while they go back and kill the demon. Anya mentions helping Willow and they're all like "You saw Willow?" and Anya mentions she was going to a cave. So now they know Willow might be there in trouble. They take Anya with them after all. Poor Willow is getting eaten. Anya sees Willow when they don't and Anya reassures Willow that Buffy and Xander are there. Buffy kills the demon and Anya goes to find help and Buffy and Xander start talking to where Willow is and then she appears. The next morning Buffy sees Willow meditating in her old room. Meditation healing. They talk. Willow tells B she was so worried about seeing her and Xander, that she did the spell. Buffy admits that she thought it was Willow that did the flaying. Willow understands. Buffy meditates with Willow to help her heal. It's sweet.
Posted by Mixtress Rae at 11:01 PM