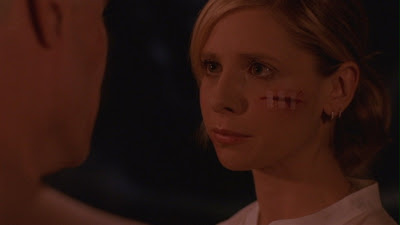 Another Potential arrives in town. Harbingers finds her, but B is in tow and kills 'em real quick. Potentials are arriving to stay with Buffy daily from all over the world.

Kennedy is flirting with Willow. She insisted upon staying with her in her room. Xander is there too. Why doesn't he sleep at his own apartment? No one can sleep. Anya's hair is getting lighter again. I was enjoying her brunette-ness, but she is always a vision. The Potentials are all worried all the time. Spike has been being tortured for days now, at least. He's fighting his way out right now. He sees B. Oh, wait, that was all a hallucination. He's still tied up and the First-as-Buffy is taunting him. Telling him Buffy won't be saving him.

Anya has an idea to talk to an Oracle to get information, but they need a demon to open a portal, so Anya is trying to sweet-talk a demon she slept with once into doing it for her. She offers him sex and he rejects her, then Giles threatens burning down his restaurant or something. What does that mean, feminism-wise? He responds to the threat from Gile, but not the offer of sex, because Anya is a human now and the demon doesn't find her attractive in human form. I don't know what it means, but this season is weaker than I remember it being. Joss didn't write very many of the episodes. Just the first and last and maybe another one or two I think. The overall story arc is still solid, but a lot of the details are sloppy.

Giles still isn't touching anything, in case you were wondering. They untie Andrew because they're sick of watching him, but he's still not allowed to leave--an obedient hostage. Willow talks to the Coven on the phone and they tell her another Potential is staying at a motel in town...arrived two nights ago. They've turned the basement into a training area. Xander and Buffy arrive at the motel room. Potential Chick doesn't answer, so they break in. The Potential is dead and it's Eve, one of the Potentials that's already at B's house, or so they thought. She's garnering dissent towards Buffy, telling the others Buffy can't protect them, etc. Andrew is so nerdy and hilarious. Buffy confronts the First.

The Oracle says the First cannot be destroyed. It has always existed and will always exist. Giles asks why it hasn't tried to destroy the Slayer line before now, and the Oracle says the opportunity hasn't presented itself until now. Something about how the mystical forces surrounding the Chosen One have been altered (with Buffy's resurrection? When Faith was called? something else?). Giles asks. Oracle answers that the Slayer altered it. By having friends?

The Potentials are being super annoying. But they would be. Buffy, Xander, and Willow are talking telepathically, but you don't see what they say. The First sends the Ubervamp to Buffy's with instruction to kill everyone except B. Willow is doing a protective barrier spell. Willow describes what it felt like to be embodied by the First when she tried to do that locating spell before...it's all scary and descriptive, then she says, "I could taste it." Kennedy asks, "How's evil taste?"

Willow can't hold the spell long, so they go out the back door, killing Harbingers along the way. It slows the Ubervamp down a bit. The Oracle has concluded that the reason the Slayer-line vulnerability exists is because Buffy came back from being dead. Anya feels guilty for bringing her back. They're splitting up...B is distracting the Ubervamp while Xander gets them all to a safe place. Xander takes them to his site, the future Sunnydale Public Library. Ubervamp shows up soon after. Everyone is expected to fight. Buffy is standing back. It was a setup, Dawn realizes. We see the scene when X, W, and B talk to each other in their minds. They planned it all, even down to Willow not being able to hold her barrier spell. Buffy has brought them here to learn how to fight. To see a fight actually happen instead of waiting at the house all the time, worrying.

That's so cool they can talk to each other telepathically. It must be leftover from their conjoining spell at the end of season 4, because Buffy initiated it, not Willow. She finally decapitates him with barb wire and he dusts, after a totally epic battle. Buffy does a speechy-speech.

Buffy finds Spike. Spike thinks it's the First. She cuts him down. They both cry. He leans on her and I think this is the first time he touches her since you-know-when when she hasn't recoiled.
Posted by Mixtress Rae at 10:59 PM