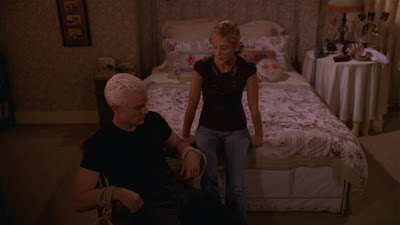 Xander is fixing the house. Anya, Dawn, Willow, and Xander are worrying about Spike being evil again. Warren is trying to get Andrew to kill someone else. Jonathan didn't have enough blood to open the seal, apparently; anemic.

Bondage fun with Spike and Buffy. Well, not as fun as their bondage used to be, presumably. But, um, he's tied to a WOODEN chair. Like he's not strong enough to get out of that. And he's tied up in Buffy's room? Wowwww. Ok.

Dawn goes to tell principal Wood Buffy is sick and is way graphic about it. She really needs to call the Council about stuff. The Council doesn't know where Giles is. Spike is having withdrawals from human blood. Andrew is supposed to kill a pig. It's really cute. The pig AND the attempted stabbing. He has to go to the butcher shop instead to get the required blood. If he could just go to the butcher shop this whole time for the blood required, why did he have to kill Jonathan in the first place? Willow sees Andrew at the butcher shop because she was there getting some blood for Spike. Andrew and Willow have a fun nerd-off. Willow drags him to B's as hostage. They tie him to a chair and "torture" him for information. It's hilarious. Anya slaps him. Buffy's room is so girly. It's so contrary to how she dresses and who she is. I suppose she's still clinging to the girliness of her youth?

Spike explains that having a soul is about self-loathing and he understands why B had sex with him, because she hated herself. "As evil and as wretched as I was, I never truly hated myself back then." Buffy hears Spike singing through the door before she goes back into the room after checking on Anya and Xander. He breaks through the chair, as predicted, and pulls Andrew through the friggin' wall, biting him.

Buffy explains the sitch to everyone and Xander intuits that the song is a trigger. She hatches a plan: Willow and Dawn are in research mode and Xander is doing something. Principal Wood goes to the basement of the school and finds Jonathan's body on the seal.

Back at B's, they now have Spike chained up for REAL this time, in the basement with metal chains. Spike tries to convince Buffy to kill him. Taunts her with information about how badddd he used to be. She gives him a rousing speech about how he can be a better man, that she believes in him.

Wood is burying Jonathan. He does NOT know how to cover a grave. Pretty boy ("with perfect almond shaped eyes. Is he an Egyptian prince?" says my husband) has never operated a shovel in his life, probably. I think they picked the wrong actor for this character. He's so vanilla for a Slayer's son.

Harbingers break into Buffy's house and wreak a ton of havoc. They take Spike. B tells everyone it's the First because B recognizes the Harbingers. There's pandemonium at the Council. Casualties. The First Evil has declared war. Quentin wants to fight back, finally, and is giving a big speech, then they blow up, like the building, with explosives and everything.

The Harbingers are bleeding Spike at the seal. Why would they choose him? It would only alert the Slayer to what they were doing. The seal activates and the first Ubervamp comes out. He's scary and stuff.
Posted by Mixtress Rae at 11:28 PM