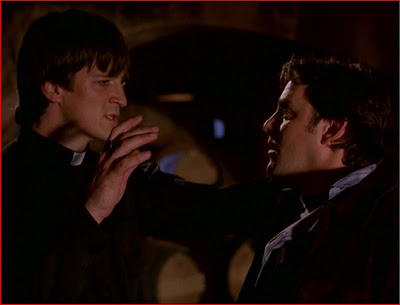 A girl is running from someone. Nathan Fillion shows up in a priest outfit and pickup truck to save her. Turns out the girl is a Potential and is trying to get to Buffy. Caleb (Fillion) tells the girl she's a whore. That all women are whores. That they can't help it. "Born without a soul." Caleb is the embodiment of our society. The literal interpretation of a patriarchal society. He brands her with his ring after heating it with the cigarette lighter in the truck. He has a message for the Slayer. Stabs the girl and whispers the message in her ear and throws her out of the moving truck. Willow finds her and she's with Faith. Faith is back!!! Yeay!!!

The First is talking to Caleb within Buffy's visage. Caleb used to be a priest, but now serves the dark side. Caleb was the one who blew up the Council and organized the Harbingers.

Andrew sums up Faith to the Potentials in a dramatic montage of of flashbacks of her story arc on the show. We even see her fight a Vulcan because Andrew got the volcanologist Faith killed confused with a Vulcan. Buffy makes up with Wood. He fires her. Tells her she needs to focus on the fight, the "mission". B needs to figure out how to get paid for this shit.

Faith goes to the basement to smoke a cigarette away from the girls upstairs. Spike is down there on his bed. They bond a little. Both of them on a redemptive path. Faith flirting a bit, mentions when they met when Faith was in Buffy's body. Spike remembers exactly what she said to him. That whole bit about galluping and warm champagne. Faith says he should have known it "wasn't blondie behind the wheel. She'd never throw down like that." Spike disagrees. B sees them talking in Spike's bed.

The girl Caleb stabbed is awake. The message is that Caleb has something of the Slayer's. So, he's calling her out. B is going to get whatever it is back and she's bringing the girls. Buffy asks Faith why she came back. Faith is a little defensive. Buffy is trying to forgive, but it's hard. She's a bit jealous because Faith helped Angel and was flirting with Spike, though she's not saying it.

The Potentials are questioning Buffy's motives and Xander defends her

Xander: I've been through more battles with Buffy than you all can ever imagine. She's stopped everything that's ever come up against her. (Buffy and Faith walk in, unbeknownst to Xander.) She's laid down her life, literally, to protect the people around her. This girl has died two times and she's still standing. You're scared. That's smart. You got questions, you should. But you doubt her motives, you think Buffy's all about the kill, then you take the little bus to battle. I've seen her heart, and this time not literally. And I'm telling you right now that she cares more about your lives than you will ever know. You gotta trust her. She's earned it.

Faith: Damn! I never knew you were that cool.

The Potentials have to fight a bunch of Harbingers in an old vineyard. Caleb shows. Kicks Buffy and Spike's ass real quick. Breaks the arm of one Potential. Kills two others. They retreat, but not before Caleb pokes out Xander's left eye. Omg, Xander!

The last scene is everyone in the hospital. Everyone blames Buffy for taking them there. She keeps trying to be proactive, but it's feeling pretty hopeless at this point.

Commentary by Drew Goddard and Nicholas Brendon: It seems like this might be one of those commentaries wherein it's less about concepts and ideas and more about "Remember shooting this scene?" So, I may have nothing to say.

Drew says each act starts with the different ways men objectify women/how the male gaze misinterprets women. Act 1 is Xander having a pretty harmless fantasy about a few of the Potentials. Nicholas Brendon is a little crude and he might have just made a slightly racist joke, but I didn't get it, so I might be wrong.

act 2 begins with Andrew retelling Faith's story arc with all the clips. Not sure how that's about the male gaze objectifying and misunderstanding women, besides Andrew not really being there for Faith's arc.

Ew. Apparently they were thinking of having a Faith spinoff with Spike as another main character which was why they had that scene with Faith and Spike. That would have been weird. I can't wait to get caught up on the comics. Even just beyond the Buffy comics, there are Angel and Spike and Faith comics, I think too. I want to know ALL the Buffyverse! Bwa ha haaaa.

Nicholas' favorite episodes are: Once More With Feeling, Hush, The Body, and Restless. Lots of really good ones.
Posted by Mixtress Rae at 5:27 PM