Buffy the Vampire Slayer: Once More, With Feeling. 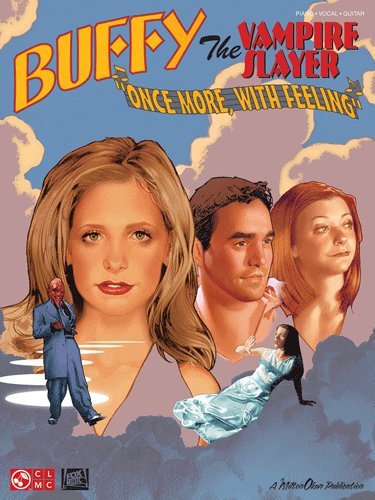 Tara discovers the dried flower Willow used to make her forget the night before. The first song is B in the cemetery singing about how she's "going through the motions". I love Buffy's deadpan voice. It really sounds lifeless, whether that was on purpose because of the character, or just tone-deafness on the part of Sarah Michelle Gellar. Whatever it is, it's perfect.

Breathtaking opening number. Buffy asks everyone at the magic shop if they burst into song this morning. They all did. "It seemed perfectly normal." "I've got a theory...it could be bunnies." Anya does an awesome rock number about bunnies. Anya asks (after the number) if it's just them. Buffy looks outside and people are singing and dancing about dry cleaning outside. Dawn gets back from school.

Dawn: You'll never guess what happened today in math class?
Buffy: (no one looks up) Everyone started singing and dancing?
Dawn: (disappointed she couldn't tell her story) No, I gave birth to a pteradactyl.
Anya: Oh my God, did it sing?

Willow and Tara escape to go do it. Tara sings to Willow about being "under her spell". Tara looks so pretty in a minty corset and olive green dress.

There's some serious innuendo throughout the song ("spread beneath my willow tree"). Exactly how they would have portrayed a straight couple, so it really shouldn't be shocking to anyone, but I bet there was an uproar of some kind at the time. I don't care enough to check, but I'm sure there was.

Dawn thinks the whole thing is romantic. "What's gotta be wrong with that?" Cut to a dude tap-dancing until he spontaneously combusts, of course. The next morning Anya and Xander sing about how much they love each other and their hesitations they're keeping from one another.

Anya and Xander whine to Giles about their tune and Giles tells them about the spontaneous combustion. They talk about Buffy too and as they're walking through town you see all kinds of fun dancing in the background. Later, Buffy goes to see Spike and he tries to kick her out real quick. He's avoiding breaking into song. Then he does when she doesn't leave immediately. He sings to her to leave her alone if she's not going to give in to her feelings for him. "If my heart could beat it would break my chest!" This episode is so much fun, even though they're all imploding and singing about sad stuff.

Tara updates Dawn: there's some kind of Lord of the Dance, but "not the scary one...just a demon." They're doing more research. Dawn tells Tara she's glad her and Willow made up. Tara says they didn't fight. She starts to put it together that maybe they did fight, but W made her forget. Bitch! Tara leaves to go confront Willow, leaving Dawn alone. She fondles some of her stolen goods and starts singing, "Does anybody even notice? Does anybody even care?" She gets kidnapped and ballet dances in some undisclosed location with wooden-faced dudes.

Then the demon above shows up. He wants her to be his queen. He's the Lord of the Dance dude. He's all smooth jazz. "All these melodies go on too long..." Dawn reveals her sister's the Slayer. He sends his wood-faced guys to find her because he wants to "see her burn". Giles is singing to Buffy as they're training about how he's holding her back, enabling her. That he knows he needs to leave her. Tara shows up to research the flower, to see if it really did make her forget. She eventually joins Giles' song. Neither of them want to leave their women, but they know they should. Tara and Giles are probably the strongest singers, so their song is very powerful. The wooden-faced boy tells B the demon is going to take her sis to the Underworld and he wants B. Xander suggests going with her, but Giles thinks she should face it alone. Spike tries to go, but Buffy rebuffs him. Buffy sings some more about wanting the "fire back" and "walking through the fire". Spike is singing about the "torch I bear is scorching me--I'm free if that bitch dies! I better help her out." They all end up going to help her after all, singing about togetherness and walking through the fire, though they're all so separated.

Buffy makes a deal. If she can't kill the demon, he can take her to hell instead. Buffy starts singing about how life's a show. Everyone shows up as she's singing about how pointless life is. Giles says, "She needs backup...Anya, Tara..." and they go and back her up, dancing! Priceless! Buffy reveals in her song that she was in heaven when she died. Willow is horrified. Buffy starts smoking...Spike saves her as everyone else is staring in horror after her revelation. Spike sings that life isn't supposed to be bliss..."it's living". The way he sings "living" is the same way B sang "heaven" and it's eery and minor-chordy and deadpan and AWESOME.

Turns out Dawn accidentally summoned demon dude by stealing the amulet from the shop. Somehow Xander has something to do with it too. The demon disappears. All the secrets are out. Dawn begins the last number: "Where do we go from here?" "Understand we'll go hand in hand, but we'll walk alone in fear." Spike suddenly realizes he's singing with everyone and says "Bugger this." and leaves. Buffy follows him and the ep ends with them kissing passionately in the alley after B sings "This isn't real, but I just want to feel".

Buffy's first song is described here as a "Disney 'I want'" song, one like Ariel's "A Whole New World" wherein the heroine describes exactly what she's missing in her life.

The scene wherein everyone explains they're in a musical at the Magic Box was meant to connect the characters with the audience. People are putoff by musicals, and this doesn't exclude our beloved Scoobies. Joss here explains the song wherein B is rousing the troops, but also simultaneously NOT feeling it. Being bored and Giles being the last to be convinced of her speech...the song was to woo Giles into thinking she's ok.

The line Anya sings in her number with Xander, "Will I look good when I've gotten old?" was supposed to be about whether Xander would still love her when she's old, not about her vanity. Ah. That makes more sense because that line bothered me before, since this is a feminist show and it's not usual for Joss to portray the characters as worrying about how they look.

James Marsters is a songwriter and musician IRL. Nice. Joss is talking about how musicals need to further the plot. That this episode is like a continuation of "Hush" in that when you stop talking you start saying something. Joss is also expressing something that I find rather important (God, the commentaries with him at the helm really are the important/worthy ones): the fact that the more restrictions you have when writing, the more things are sort of done for you. Michelle Trachtenberg wanted to dance and sing as little as possible, so he created her role in the episode based around that. Alyson Hanigan didn't want to sing at all and Amber Benson has a phenomenal voice, so he wrote to everyone's strengths. I think that's one of the things that makes him such an incredible writer, because he writes FOR his muses and works with their attributes and is able to recognize the attributes of one-off bits like James' and Jonathan's. Because he recognizes and works within his actors' strengths and limitations.

Didn't realize the scenes with the bad guy are in the Bronze. Thematically, the scene wherein Giles is singing to Buffy as they train wherein she's in slow motion, but he's not, is about how she's in her own universe so much, that she's in her own time-speed as well. That makes sense to me. I feel like I have my own time too...that it passes differently for me. I'm slower, it's faster. A day off is never long enough for me. I know, "Nobody likes their job, nobody had enough sleep."

They didn't kill the bad guy in this episode because he "represents something you can't kill off". He settles into the air around them and what he did (got them all to say things they weren't previously saying) cannot be undone.
Posted by Mixtress Rae at 4:55 PM