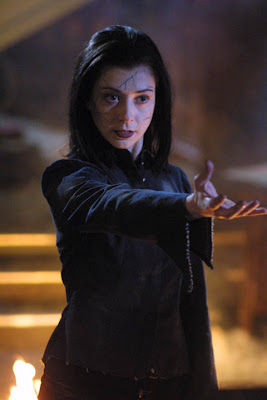 So the "two to go" in the title refers to Jonathan and Andrew and also two to go in the season. It confuses me that she's targeting the two boys that didn't kill her girlfriend, but we're supposed to believe that killing a human changes a person. Willow now CANNOT be reasoned with and we need to start really being scared of her. Here we go!

Anya, Xander, and Buffy are in pursuit. Xander is nauseated thinking that Willow did this. Anya teleports to the jail to try to help Jonathan and Andrew. Buffy runs super fast to get there and Xander feels impotent because Willow ruined his car and he doesn't have special powers. Andrew and Jonathan are hilarious. So glad we get to have Andrew next season. Anya shows up and briefs them on what's up. Anya tries to convince the prison guard to let them out. Willow shows up outside like a black tornado. She makes a dramatically unnecessary entrance. She's throwing policemen and pulling the bricks out one by one. While Willow is wasting time being dramatic, Buffy comes in the front door and gets them out. Xander has a getaway police vehicle. Willow catches up as Jonathan is expressing how he can't believe what they're running from is Willow who used to pack her own lunches at school, etc. Luckily she starts running out of juice and they're able to get a bit ahead.

Dawn convinces Clem to let her out to help Willow somehow.

Spike glimpse #2. His first trial begins. He has to fight a big burly dude with flamey hands.

Dawn has convinced Clem to lead her to Rack. They're back at the magic shop. Anya has found some protection spells. Since they suspect Willow is running low on magic, they know she's probably re-juicing. So she goes to Rack, of course. She sucks all the magic from him. Clem and Dawn arrive shortly thereafter. Dawn and Willow meet for the first time since Tara's death. She's killed Rack. Dawn tells her she misses Tara too. Willow taunts Dawn. Buffy arrives as Willow is threatening her.

Xander and Anya are trying to translate Sumerian for the protection spell. Xander confesses that he saw the gun right before Warren raised it, but he froze. Xander feels useless.

Buffy tells Willow "You have to remember you're still Willow." Willow tells B the only thing she had going for her was Tara and now she's gone. Buffy starts with a speech about living. As they're talking Willow transports the three of them to the magic shop. Her magic doesn't penetrate, 'cause I guess a protection spell is in effect. Anya is standing behind a shelf chanting.

Willow does a spell to make herself super-strong and her and B go at it. Destroying everything in the magic shop. Xander takes Dawn, Jonathan, and Andrew and runs. Anya stays behind to work the protection spell. Just 'cause she's strong doesn't mean she knows how to fight...'course she does, but that's never a thing in shows. Strength does not necessarily equal skill. Willow discovers Anya chanting. Willow knocks Anya and Buffy out. "There's no one in the world that has the power to stop me now."

Then Giles shows up!